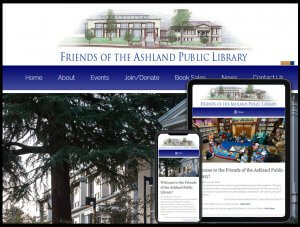 Donating this site is yet another example of Project A’s commitment to not only education and the arts but also our beloved city.

About the Friends of the Ashland Public Library
Our organization was incorporated in Oregon in 1983. In 1998 we received nonprofit status from the Internal Revenue Service as a 501(c) 3.

However, since long before we became “official,” Ashlanders have been enthusiastic supporters of our library.

As Jan Wright wrote in History of the Ashland Public Library (2012), as early as 1877 a group met to discuss the idea of a library in the community. Through the early 1900’s, the library moved from place to place, but wherever it was located Ashland citizens supported it with fundraisers and book donations. In 1912, the community rallied to build the Carnegie building, and that strong support has continued through all the years since.